In Canvas Parent 3.3, parents and observers can link to a student by using a QR code. If needed, a new Canvas account can be created for a parent or observer directly from the app.

Canvas iOS app version updates are distributed in a phased rollout, which distributes the update to all users enrolled in automatic updates over time. The features in these notes may not immediately be available, but iOS users can manually update the app at any time in the iTunes Store. The Canvas Parent iOS App requires iOS 12.0 or later.

BACK TO TABLE OF CONTENTS

If a Canvas account already exists, parents and observers can log into their own accounts via the web to generate a QR code, which will allow the parent to easily log into the app.

In the Parent App Dashboard, parents can add a new student and select the QR code link. 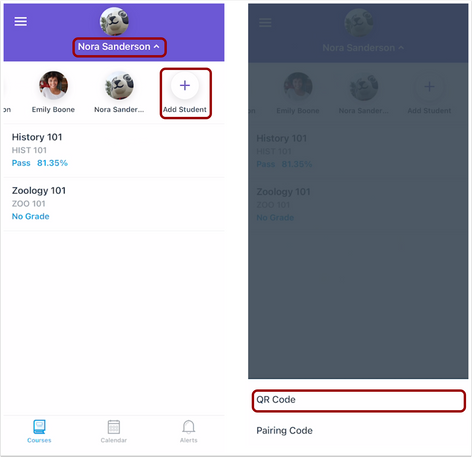 The student can open the Settings page in the Canvas Student app and view the Pair with Observer link. The app will generate a pairing code, which the parent can scan and use to create an account. This pairing must be done from the Student app to the Parent app. This code is only valid for 10 minutes, after which a new code must be created.

In Canvas 3.3, parents can use the QR Login link to create a new Canvas account if one does not yet exist for them.

A parent can ask the student they want to observe to create a pairing code inside the Canvas Student app. Instructions for creating the QR code are provided for the parent as part of the Create Account page. 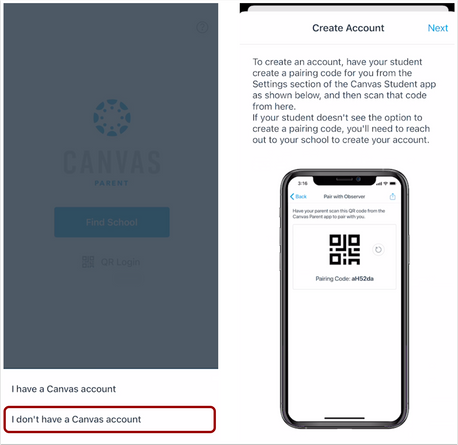 Scanning the QR code provided by the student from the Student App allows the parent to create a Canvas account.

The QR code includes a six-digit pairing code, which automatically displays within the Signup page. After all fields have been completed, an account will be created for the parent, and the paired student’s course will display in the Parent App Dashboard. 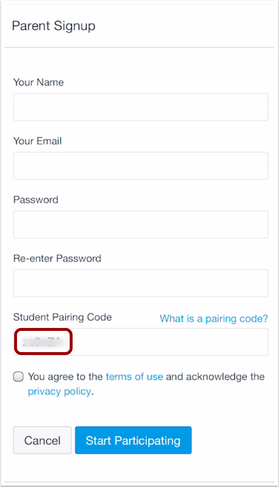 BACK TO TABLE OF CONTENTS