I would like to integrate the full function of Khan Academy in my Canvas. This would include their comprehensive practice, quizzes, and progression tracking tool. Has anybody in the Canvas community had experience with this, and what do you suggest?

James
Community Champion
In response to jzbroderick
Jump to solution

I didn't watch it when it was around, but it was probably demoing the Khan Academy app in the EduAppCenter.

Here is another video I found: Khan Academy Classes and Embedding in Canvas - YouTube

mchaus
Community Member
In response to James
Jump to solution

I followed the directions from this YouTube video, but when I click on Khan Academy in the External Tools, I get this blank menu

lisaschlottman
Community Member
In response to gbutters
Jump to solution

I absolutely agree. We should be able to assign work in Khan Academy through Canvas and have the it automatically graded. There is no way that I can create the interactive content that Khan Academy has! Why can't we do this?

I'm reaching the same screen as mchaus has posted above.  I also don't have the green leaf in my Rich Content Editor but Khan Academy is listed as an external tool when I go through assignments and submission type.

Is this because my district hasn't enabled the feature or is there another reason?

I came across this thread last spring looking for a way to make this work. Unfortunately, Khan Academy's API is non-existent anymore making a direct integration difficult. So, since last spring I've been working on making a way to make the two communicate as best as possible. I developed an application built on a Google spreadsheet that reads in Khan Academy CSV files and automatically sends the scores to your Canvas grade book. It does take a little bit to set up because it needs a way to match students in Khan and Canvas. The link below will take you to a website that has the spreadsheet and extensive documentation on it and how to set it up. I linked a demo video below to see it in action. Hope it helps someone! Feel free to report any bugs to me. 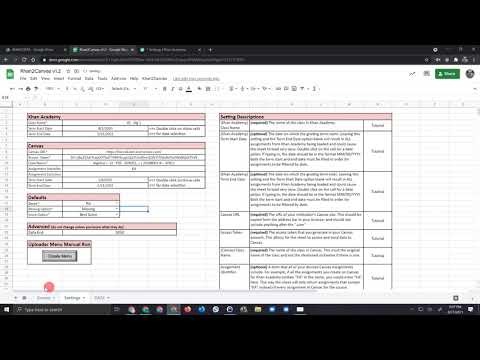 It would be great to be able to integrate the Khan Academy Practices with Canvas. I appreciate the Sheets based work-around that was offered (very impressive work), but that plan is not a robust solution for most of us. This topic should not be tagged as solved.

Community Team
In response to elad33
Jump to solution

If you're interested in seeing a deeper integration, please send that request to Khan Academy and ask them if they'd be willing to devote development resources to such a project.

I definitely agree Khan Academy should be working to integrate this. I think it's worth pointing out, though, that KA had an integration not that long ago (I don't think it transferred grades but just allowed linking content) and that disappeared when KA decided to completely kill off their API as of July 2020 (link). Without a functioning public API, there isn't much chance of this happening or even someone trying to make a direct integration on their own.

Why they got rid of their public API in the first place I have no idea.

I got sick of waiting and made what I did, getting as close as I could to an integration. But even then, ignoring the fact that they have no API, there isn't a way to import students with sortable names. Both Google Classroom integration and district auto-rostering are unreliable for supplying sortable names for students. It doesn't sound like Khan Academy's integration department is up to much of anything these days. The only change I've seen to Khan Academy in the three years I've been using it is they added the option to include a start date on assignments.

Note: for those of you who don't know what an API is, it's an application programming interface that bascially allows systems to "plug into" each other and share data. Canvas has an absolutely amazing public API. Wish others in the edtech field were more like them in that sense.

bunzejj
Community Member
In response to josephclaytonha
Jump to solution

This is a good point. As of right now, Khan does allow districts to auto roster Khan Academy classes from a system such as Clever (which is in turn linked with the rosters on Canvas). I'm not sure what kind of data is used to create those accounts for students and whether it's enough to create hard connections between Khan Academy and Canvas.

There are unique IDs for Khan Academy users (known as the kaid) so there seems to be some infrastructure for tying accounts between the two systems especially if they were auto rostered.

I think what a lot of people are looking for is a way to import scores for exercises, quizzes, and tests and then a completion flag for videos and articles into a corresponding Canvas assignment. Again, the infastructure is already available on Canvas' side (their public API) but the Khan side is fairly closed off.