2018 and the Miracle Christmas

What was your greatest accomplishment in 2018, or what was something you did that made you feel especially proud?

I COPED. Okay, yeah, I know: everybody is always coping... but this past year presented me with harder stuff than I've ever had to deal with before, and somehow — thanks to a lot of help from a lot of people — I got through every day of 2018. Every single day. And now it is 2019... and I am still coping! 🙂

Long story short is that in October of 2017 my 90-year-old dad was diagnosed with advanced lung cancer. He had been depressed since my mother died (that was in 2015), and we had all thought his dramatic weight loss was from being lonely and just not eating. But instead it was the cancer. So, after the diagnosis, the oncologist put him through a series of palliative radiation treatments hoping to shrink the tumor and ease his breathing, transferring him to hospice as soon as the radiation cycle was over. But those radiation treatments just about killed him (I was flying out to Texas every couple of weeks and saw him spiraling into a terrible decline), and in January I got the dreaded phone call from hospice: come now; your father is dying. A week, maybe two. Not more.

Thanks to some miracle-working homecare helpers, he came back from the brink. One woman, Eva, was the chief of the miracle-workers that January. She made it her mission to help my dad feel like a human being again after the total assault on his body by the radiation... and she did it. She then found herself facing all kinds of family crises to deal with herself and had to leave to go take care of her daughter and then her own father, but luckily another wonderful helper named Judy appeared, and she was able to carry on where Eva left off, and Judy is still our main homecare helper.

I was in Austin during that turnaround last February and March, where Eva and Judy and all the Hospice Austin people and I were working with my dad so that he could stay at home. I cannot say enough good things about our whole Hospice Austin team: nurse, P.A., social worker, chaplain, CNA. They are the best.

Around the end of March I was able to come home (my husband was so great about taking care of everything while I was gone), and now I go back to Texas once a month to be with my dad. He has someone there 24/7 and so he has been able to stay at home, which is what he wanted/needed. And he should be able to stay at home until the end. Which will be when? Nobody knows. But as long as he uses the oxygen, he feels okay, even good. And good is, well, GREAT, given the circumstances.

We were able to celebrate his 91st birthday in August.

We celebrated Thanksgiving together.

And we had Christmas!

So, here we are, it's 2019, and I'm exhausted. But my dad has had a great year, strange to say, and I am glad for him. He's been in touch with so many friends, and there is something good about every day. And I really like that hospice approach: it's all about how you are feeling TODAY.

This coming year is going to be really hard, but I am so glad he did not have to die as a result of a radiation-induced collapse. Whatever happens in these coming months, it is going to be different, and better, than the nightmare of last January.

Who around you made your 2018 journey possible (personally and/or professionally)? What did they do to support you? Have you told them the impact of their influence? Did you pay it forward, or do you plan to in some way?

Well, in addition to my family saga, all kinds of other things were happening too, like being able to go to InstructureCon this year, where I met so many of my online friends IN PERSON for the first time ever. That was ... AMAZING. So I owe huge thanks to Instructure for giving me such a beautiful adventure in the midst of what was a hard summer.

Just as my dad is thriving on people-power and human kindness right now, the same is true for me. A big difference from my dad, of course, is that most of my interactions with people are online: I work from home online, so except for husband and our cat, and now going to Texas every month, my life is far more digital than analog.

But of course there is also something wonderful and different about being able to expand friendships into that face-to-face space, along with meeting new friends. And this summer it was an even more special gift to get to meet people in person at InstructureCon!

Maybe you have an extraordinary and non-work-related reason to be grateful this year. What is it, and how did or will you celebrate?

That would be the miracle Christmas: I got to celebrate Christmas 2018 with my dad, which no one (NO ONE) ever thought would happen (especially since Christmas 2017, the "radiation Christmas," was the worst Christmas ever...).

We mostly listened to music; he LOVES music, especially jazz, big bands, and country. Here is the Christmas playlist I made that we played for hours and hours on his TV: Christmas Songs with Jack.

What other elements of gratitude or giving are on your mind and heart as we wrap up 2018?

I started out 2018 terrified about what was going to happen. But now I know: when you have friends, you don't have to be afraid, because you are not alone.

So here's a huge THANK YOU to all my Canvas friends. I hope we all have beautiful days to come in 2019!

laurakgibbswhat a beautiful and honest tribute to 2018. I'm so pleased you got your Christmas miracle, and that the worst Christmas in 2017 memories have been replaced by much better ones.

Our family also discovered how wonderful Hospice is in 2018 as my wonderful Mum was supported by them. Magic people.

Work tends to take a back seat in times like these but it's funny how the Canvas Community helped to keep my skin in the game during a tough year. I'm sure it will bring you a bit of zing in 2019.

We will be thinking of you!

Had to give you a cat hug, even though we've never met I know your passion for cats!

awwwwwwww... all the cuteness! 🙂

I'm so glad you had a Christmas miracle--and that it's still on-going! 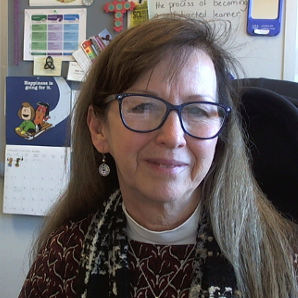 laurakgibbs‌, it sounds like your 2018 was a challenging one but one that provided you much in return.

Happily teaching online at the University of Oklahoma since 2002.