Currently, in order to edit a user’s personal pronouns via the Canvas API, both “Enable Personal Pronouns” AND “Allow users to change their pronouns in Canvas” have to be enabled in the Account settings. Per Instructure’s Support and the documentation of the Users API, this appears to be intended behavior. This does not make logical sense and creates a significant barrier for institutions attempting to create a centralized process for supporting equity and inclusion on campus. 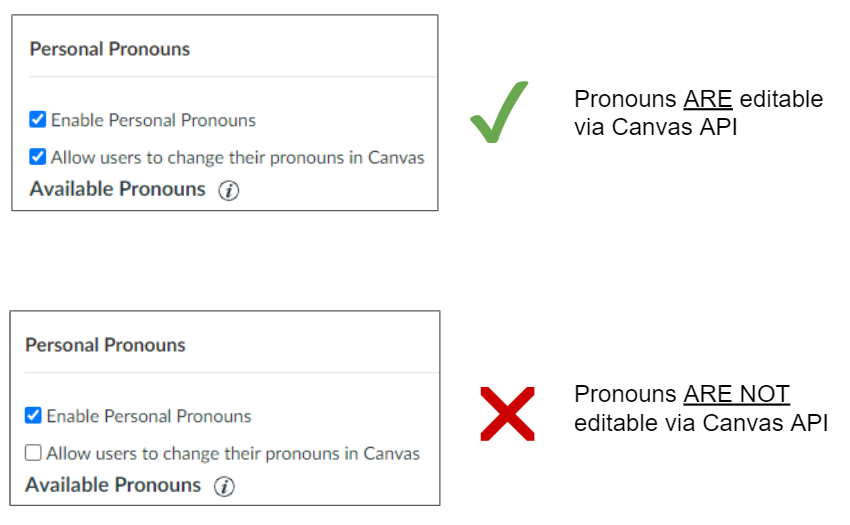 The desired behavior follows these steps:

This ensures consistency across all campus systems and ensures that members of the community only need to enter information once.

Currently, Canvas follows these steps for a user’s personal pronouns:

The solution proposed by Instructure’s Support is to follow these steps:

Support sums this up with the assurance that “This does not remove the pronouns that have been imported, however at this point the option to edit these is locked.”

However, while that’s accurate, this solution will not work in a real world environment.

This adds an extra burden on staff to coordinate these settings changes and the API call. It also guarantees that there will be a delay between members of the community selecting personal pronouns in the systems of record and those being reflected in Canvas, during which the chances that they will be referred to by incorrect pronouns are high. This will result in user frustration and real world harm. There is also a chance that while the API call is running, a user in the Canvas user interface may discover the option to edit pronouns in Canvas. Any changes they make there may either be lost or not update in other systems, similarly resulting in frustration and harm.

That will allow updates to run as soon as users make changes in the systems of record without any manual intervention from admins. It will ensure that members of the community are able to accurately and respectfully communicate with each other during online discussions and other class interactions without significant delays and oversight.

Just wondering if this issue has moved at all?
We would agree that this seems a bit obtuse and works against an institution trying to centrally manage gender pronouns as a normal attribute for any staff or student user rather than as a special case.

It seems like it would be simpler to enable pronoun support, disable the ability for people to change it, and then send the pronoun information through a SIS import. This satisfies all of the conditions of your desired behavior.

The minimal users.csv file has four fields required: user_id, login_id, pronouns, and status. You don't have to supply any other values, which will keep the existing values in Canvas.

Another approach would be to look at who is making the API call and if they have admin rights, let them go ahead and change the pronouns. That might involve some permissions as well and there is probably some reason not to do this that I'm not thinking of.

Currently, the way that Canvas has for you to set pronouns that come from a SIS is to use a SIS import.