I'm an Instructional Designer who supports faculty using Canvas. In SpeedGrader, when an instructor enters a general comment but doesn't submit it, then navigates to a different student, the comment's text is auto-saved as a draft. When the instructor returns to the first student's submission, this draft status is indicated by a tiny red asterisk to the left of the comment. This is confusing, since it doesn't say "Draft" anywhere. This is also an accessibility issue, since users with color blindness or users with any level of visual impairment may not be able to see the tiny red asterisk. I propose replacing the asterisk with the bold word "DRAFT," which is clearer, more accessible, and more inclusive.

It would also be helpful to clarify that the grey "Submit" button is specific to the draft comment and works differently than the blue Submit button, which submits both comments and grades.

Screenshot of the asterisk to the left of a draft comment: 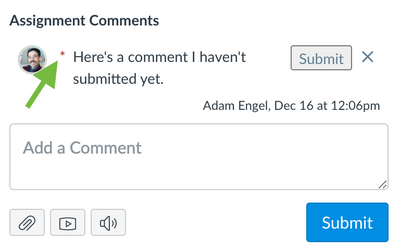 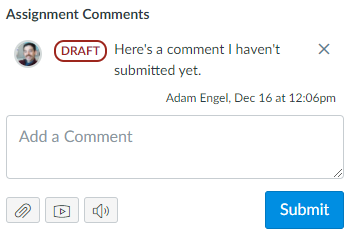 The current indicator of the save but not submitted state (a tiny red asterisk) is too small to be easily noticed and does not indicate what the asterisk means. In order to help limit the amount of confusion and time spent on trying to understand why comments are not visible to students, Instructure should perform at least one of the two following actions: 1) Increase the size of the red asterisk. This would undoubtedly make instructors not overlook the red asterisk and reduce the time spent checking on comment visibility in Speedgrader. 2) Include a small message next to the existing red asterisk that explains what the red asterisk means. While this message is visible in other locations, having it directly adjacent to the red asterisk will not only increase the chance of instructor awareness of the issue, but it will increase the understanding of why comments are not visible to students.

In sum, the modification of this existing feature with the suggestions listed above will only benefit instructors, support staff, and students due to greater awareness of Speedgrader comment visibility and the red asterisk.

Once I move away from a student in the SpeeedGrader I am unlikely to go back.  So I am thinking an additional alert to raise instructor awareness of the unsubmitted submission comment is needed. Perhaps this would be something added to the instructor to-do list? Or perhaps a formatting change (cell color?) in the Grades view?

For Canvas Data users and the Canvas product team --
I created a report that enables an admin to identify graded submissions that have draft/ unsubmitted comments and it works great. Perhaps this will help someone while the idea is being considered. Key elements include: 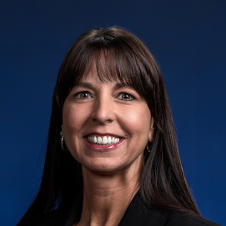 This would be extremely helpful to our instructors!  We notice it happening frequently. 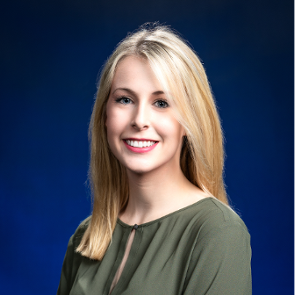 This additional alert would be very helpful! We are currently running a weekly report to help catch unposted comments as a way to support faculty because it is very difficult to see the asterisk when you are in there grading. Great suggestion!

Yeah, I just spent 90 minutes doing tests in Student View, trying to solve a student's problem, to eventually discover the importance of the Red Asterisk. This definitely needs a better flag. I like adam_engel's idea of the red DRAFT label. 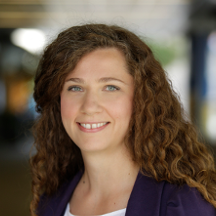 Our faculty would love to have the asterisk replaced by 'draft'.  It is even more important when you have teaching assistants putting in comments and not submitting as the instructor will not know or be able to confirm if they have submitted.  An Asterisk is not a intuitive notifier of feedback not being submitted.

I definitely agree with this. It would be a quick and easy thing to fix, and make a big difference.

This is a great suggestion. We get many instructors reaching out with questions as to why some students can see comments and others cannot due to not knowing the comment hasn't been submitted. The asterisk is much too small for most people to notice and it usually requires a support ticket to figure out what the asterisk is indicating. I like the idea of a Draft label.

This brings up another very important point. Feedback is extremely important for learning. Our instructors often leave detailed information in the comments section but are frustrated that they cannot go back in and edit a comment that hasn't been submitted. Currently Canvas only allows you to submit the comment or delete it. We would very much like to see an edit option as well.

laurelp
Community Member
I second this suggestion! It's incredibly easy to miss the tiny asterisk, and trying to get new graders/teaching assistants to learn to notice it is even more difficult. It should be easy for Canvas to implement a more obvious way to notify the instructor of the comment only being a draft.

laurelp
Community Member
I second this suggestion! It's incredibly easy to miss the tiny asterisk, and trying to get new graders/teaching assistants to learn to notice it is even more difficult. It should be easy for Canvas to implement a more obvious way to notify the instructor of the comment only being a draft.

laurelp
Community Member
I second this suggestion! It's incredibly easy to miss the tiny asterisk, and trying to get new graders/teaching assistants to learn to notice it is even more difficult. It should be easy for Canvas to implement a more obvious way to notify the instructor of the comment only being a draft.
About Idea Conversations
In the Instructure Community Ideas space, you can share, converse, and rate idea conversations related to software improvements to Instructure products.
How do Idea Conversations Work?