I am uploading Storyline 360 files to Canvas. Most upload fine (I publish for WEB, HTML5, and zip the file. I create a folder in the FILES section of Canvas and upload, expanding the zip file. I then link the story.html file to a Canvas module), but the latest one uploaded and then shows like this. The font is off, the screen is dark, it's not working. Any ideas? Is it using Flash? 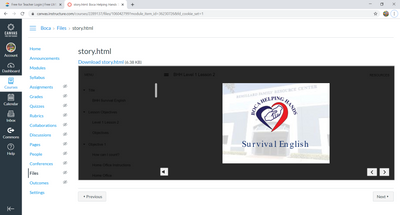 Just a quick update...  This past Friday we asked our Instructure CSM (Customer Success Manager) to turn on the SCORM LTI in our Canvas environment.  (I guess this is different than the SCORM Cloud LTI that is listed on the EduAppCenter.)  Once our CSM turned on SCORM, these are the steps we followed:

Hope this will be of some help to others.  Fingers crossed!  🤞

I would also be interested in an answer to this, too.  I am working with an instructor at our school who is also incorporating Articulate Storyline content in a course.  It looks like he is following the same steps that you've outlined, @VictoriaN.  The font is a little screwed up, too.  For example, some of the words within his slides are missing letters, and the slides are not showing full screen.  I suggested he reach out to the tech support folks at Articulate Storyline to see if they have any suggestions.

VictoriaN
Surveyor II
In response to chofer
Jump to solution

@chofer I spent quite a lot of time trying to figure out where the problem was coming from...I created the zip file and uploaded quite a few times (definition of insanity), I tried to make a new file and import the slides in and rename it, I tried to start with a new file and import scene by scene with an attempt to upload each time to see where it might break (it broke immediately and even worse), I tried to upload to my work Canvas account with a university, nothing worked. Then, I read in the Articulate community of a similar problem being caused by a corrupted file. At that point, I made a short storyline lesson and uploaded it; it worked, so I assumed that the issue might be a corrupted file and not necessarily a Canvas issue. I rebuilt the lesson, which took hours, and made sure to avoid visuals from outside sources. I had used a couple of visuals from a collection I had purchased about 5 years ago. It uploaded and is working just fine. Fingers crossed.

Community Coach
In response to VictoriaN
Jump to solution

I am facing a similar problem. If the mp3 file is away then the storyline runs.

I am experiencing the same issue with Articulate Storyline 3 files. When copying code from an existing course created last year the font, format is fine (Image Top). But when I upload the same zip file into a new page I lose the font, format and script freezes.(Image bottom).

Any suggesting would be grateful.

I am having the exact same problem. The storyline file worked in June. Now it doesn’t and yet nothing in the file has been changed. But the font is full of symbols and squares or the files just don’t load at all.
This seems to be such a common error for us with storyline and canvas, I feel like we may need to abandon it.  Such a shame as we have created some really beautiful content in storyline.

Hello! Any solution for this issue? Looks like it is not a isolated problem.

Hello everyone, I think that the problem is not with the storyline projects because it seems that we have all tried with the same files we published in June and July, They worked very well, but all of a sudden they are freezing or not displaying properly. I believe that the scorm adaptability feature in Canvas is no longer working, and that is why we are all facing the same problems. I opened a ticket when this problem started, but they said that the FFT accounts are not supported. The final solution I found was to publish the storyline project on Rise 360, copy the sharing link form Rise and embed the URL in a page in Canvas.

VictoriaN
Surveyor II
In response to Mayy
Jump to solution

I was not using the SCORM function...I uploaded the storyline projects just as material for the course, not as a graded assignment. Would the SCORM function still be interfering if I had not explicitly connected it? I am also using a free teacher account for these lessons and tried to open a ticket for help. I got the same message...that our tickets are not being supported.