Instructure's official blog for product updates, calls for feedback, and communications from our product teams

In this and the following quarters (Q3 and Q4 in 2022 and continuing in 2023) the Catalog team will be working on improving Catalog Analytics. Let me break it down to you in detail what this means.

Working on Catalog and Commons as a fresh start

Since I’m over my first month here, at Instructure, I guess it’s time to write my official introduction. So, hi everyone, my name is Kata, and I’m a Product Manager for Catalog and Commons.

Translations in a global world of education

Ever wondered why internationalization is essential? Come and hear from our New global PM and her focus on improving localization and translations as part of her role.

The Catalog Team spent the beginning of the year tweaking and fine-tuning the Shopping Cart and improving receipts. The team has also started building a new feature: Bulk Purchases and Enrollments. This feature enables individuals to purchase multiple seats in a single listing and distribute those seats by inviting students to enroll in that listing for free. This feature can also be used to enroll multiple students in free listings Users can view historical payments and enrollments by accessing the Purchases and Enrollments page from the Catalog menu.

Similar to the Shopping Cart feature rollout, the Bulk Purchases and Enrollments feature will be released in multiple phases to Beta, but in one batch to Production.

A new button will soon be added to the Details (Listing) page to allow institutions ample time to adjust their custom CSS/JS code. In the beginning, the button will not work and I apologize for this limitation, but we would like to make sure that institutions have time to adjust any customizations, if necessary. Our goal is to have this new feature finished by the end of Q1 2022 and have the first Beta release next week.

Please stay tuned, I will update this thread after each Beta release.

UPDATE: We will need a little bit more time to complete all the requirements for bulk purchase and enrollment so it's not going to be finished by the end of Q1. I will keep this post up-to-date and let you know about the upcoming Beta release dates.

UPDATE2: May 23 we released another major part of bulk purchase and enrollment to Beta. We are going to have a few more Beta releases before releasing the new functionality to Production. 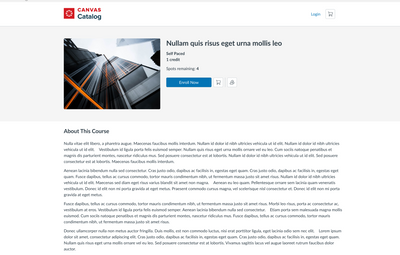 We all know that data matters. Over the last few years there has been an increasing demand for easily accessible, accurate, actionable data in all educational products. Catalog is not an exception, and we would like to make sure that the reporting and analytics solutions that are available in Catalog serve your data needs.

As I have mentioned in my previous post, the engineering team is working on adding a shopping cart to Catalog. We have broken down this improvement into 3 different phases, and we will roll them out to Catalog Beta in 3 different steps.

You are probably wondering what the Catalog team has been working on recently and what other developments we are planning until the end of 2021.

Big Things Ahead for Canvas Catalog

2020 taught us a myriad of things in the landscape of education technology. It accelerated a transition we’ve seen coming for a long time with the rapid rise of individuals learning in a remote environment.

Currently, the Catalog team is working on email customization and right after that we are going to jump on adding a shopping cart and supporting bulk purchase. In the meanwhile we are also working on identifying a longer term roadmap for Catalog and for this, we would love to get some feedback from you.

As Authorize.net made it public, they have deprecated and are sunsetting their SIM solution, a.k.a. the “classic” Authorize.net payment gateway.

First of all, thank you for the answers and useful feedback you provided after my previous post. We really appreciate this group’s responsiveness and valuable insights.

As 2020 is almost over we wanted to share our Catalog plans for the first half of 2021 with you, so you can see what to expect and plan accordingly.

In the upcoming months, the Catalog team is excited to work on a few Catalog improvements. We are considering such projects that don’t require massive engineering effort, but that address real customer pain points in the product. You can find the list of potential projects below. Please let us know what you think of these improvement ideas and leave a comment on how helpful they would be for your institution.

reCAPTCHA for Canvas Self Registration

Institutions wanting reCAPTCHA for self registration can opt in before it's made generally available.

Some Catalog users have noticed a sharp increase in fake accounts being created over the last few weeks. We're adding 2 new features to Catalog to help mitigate the issue.

Welcome to 2020. I hope everyone had a fun, relaxing holiday break. This time of year always provides an opportunity to reflect back on what the previous year shaped up to be, as well as look ahead to what the new year might bring. I thought I’d take a few minutes to do something similar for Catalog.

The Catalog team is working on an automated process that will update beta on a regular cadence so you know what to expect. More information about this functionality will be announced when available in a future version of the release notes.

We're excited to be working on an all-new version of the listing and program create/edit page. As with all of our UI rewrites, our goal is to be streamlining the design and leveraging our awesome library of InstructureUI components. We also hope to make the page generally more user friendly, more accessible to keyboard users, and more functional.

I'm excited to announce that we have created a beta environment for Catalog for our Canadian customers. It went online on Monday, April 22nd. We're working hard to stand up other beta environments internationally, and our goal is to have a beta environment in every region where Catalog is available by the end of May. This will allow all of our Catalog customers to preview and test new features before they move to our production environments. As a reminder, beta environments are refreshed every 3 weeks in lockstep with our deploys.

As we've mentioned, Catalog is following the Canvas deploy schedule. That means we're deploying new code every 3 weeks to both Beta and Production.

The front end of Catalog was constructed mostly in a JavaScript (JS) framework called Ember that was popular around the time Catalog was originally being built. Ember has some inherent downsides that can make it difficult for our engineers to work with, and we would like to eventually move Catalog over to a more modern framework called React. This will happen over time.

Here's a recap on what happened in the recent Catalog release.

I’m excited to be posting another update on Catalog.

BAM! Just like that, in the blink of an eye, we find ourselves deep in the month of March. Spring emerges cautiously from the now-distant holiday season as we arrive at another Catalog community update.

Meet the team behind Catalog

Time for another blog post! In this episode we'll give you a peak behind the curtain and introduce you to some of the amazing team that works on Catalog.

I hope you all had a wonderful holiday weekend. I'm posting today to give you an update on the status of Catalog and talk a bit about where we're headed.