Status: Archived Submitted by kristi_levy on ‎01-29-2016 10:01 AM
(73)
As we move toward Personalized Learning we are beginning to feel boxed in by the linear design of Course Modules.  Many teachers would like the Course Modules to look more like the Course listing in the new UI (Tiles rather than lists) AND have the functionality to have Modules within Modules.  This would allow for MANY more options for student Voice, Choice and Pacing options!
Please refer to our comment from the product team.
Labels
Tags (15)
Share
199 Comments
wsaleem
Community Participant

Please add the ability to put Modules within Modules (basically nesting folders). This would make things so much more organized.

I think it would be “neater” to have all the videos on one page – esp because I’d like to keep them within units….But I would, also, like to be able to easily see all the video titles because sometimes a student has a problem and I want to give her the video but not have to go looking for it (I don’t want to open all the boxes to find the video I am looking for)

I know that I can create text headers, but that I can't see the pages within without actually opening the pages. My pages have multiple videos on them, and I want to easily see what all the videos are without having to open the page.

I would love to have modules within modules! I would use it to move all my modules for a quarter into one big module named "1st Quarter". Then the students' and my modules are much less cluttered!

It would be helpful to create a module that included folders to store material from different chapters.  In some way it would be great to create a module inside of a module.  For example: Module on Lectures and Student Resources.  Within that Module have a Module for each chapter that includes the materials (lecture, videos, quiz, discussion) for that chapter.  In the current status it seems like a lot of the information is provided and it can become confusing for students.

What I would like to see is the ability to have headings *outside* of the modules in the module overview. My classes have larger units (typically between four and six), with week-long modules in each unit, but with the functionality as it is, I can't make the unit titles visible at a glance outside the modules (see picture for what I mean)

As a teacher in a virtual and hybrid world, it would be effective to be able to organize my modules in a more cohesive way.  For example, like an outline, you would have the option to subdivide and level your larger modules.

I know you can work around this with a text header, but if modules had levels, we could link and send students directly to the part of the module they need to be in for the day.

An open source math CMS that I use has this feature and it is invaluable.

But this is Canvas, folks. They're not going to implement something just because you've asked for it!

I like this idea a lot, though I initially thought it would be achievable through Mastery Paths, I can now see you are looking for a way to organize the pages better. I think until the idea becomes a possibility, using the ideas in the comment from @Stef_retired would be a good option. I've started to do the same in my courses, and it has helped clean up the UI on the student end, though on my end it's kind of a mess.

I've read that some instructors feel that nested modules wouldn't be beneficial.

In my experience, there are times—especially when there are a variety of things going on—like right now with COVID—when the ability to nest would be advantageous to everyone.

I'd love to be able to do this, for example: 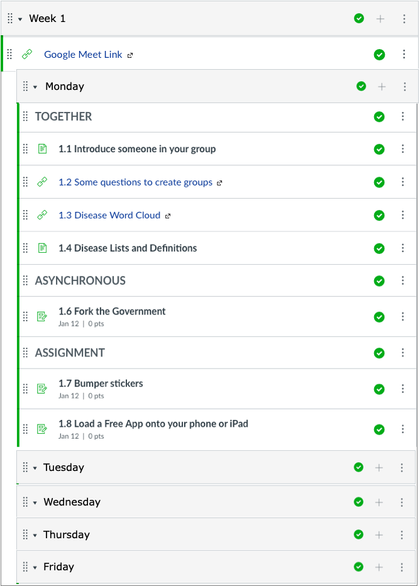 Thank you Eric!!   Excellent Example....  It would be nice to go out to a sub-mod and return to the upper mod when done.  I would like to send my students off to reading material I have gathered and then come back to take a Quiz or do an Assignment.

I agree. Currently, our elementary teachers (with year long courses and daily modules) link to the day's module. Now that there are so many modules it takes a long time for they day's module to load. I timed it at 17 seconds in my own household, this is an incredibly long time for our youngest learners. Being easily able "to fold" modules for a month or trimester would be helpful.

Although not quite the same as a module within a module, a sub-module could be created out of headers using this pair of ideas:

expand and collapse the activities under each header

Allow headers within modules to subdivide module requirements and set other headers as prerequisite....

Seems a little cluttered to me.  I think the Module with Submodules would be cleaner..

I would be so happy if I could nest even one level of modules within another. An OS CMS I use allows (theoretically) infinite nesting, which can get very messy. Even that though, in my opinion, should be up to the individual user. Why are they trying to tell me in what ways I am not allowed to organize my classes?

So I would strongly support and be a very early adopter of submodules.

If I could do this, then the default of the modules page would only have six, seven or eight modules on it instead of 18, 21 or 24, depending on the course.

I think you misunderstood me Eric, I also strongly support submodules since I was the original poster of this Request!!

I just found this post and I am in favor of having folders in modules - I am new to using modules due to the online requirements for courses that I never had to consider before covid.

Currently I have modules that have 30 or 40 items in them(content organized by chapters) - I guess I could always create more modules like chapter 1 part1, chapter 1 part2, etc.  However, I would rather have a single chapter 1 module and then the part1, part2 etc parts as sub-modules. 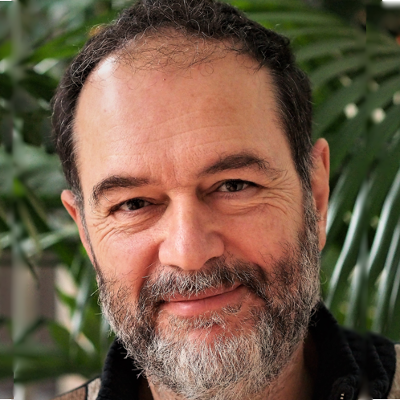 Maybe this extension would be helpful, waiting for a server-side solution: