Branding across accounts and sub accounts

Hello everyone!  The University I work for is in the process of implementing Canvas, we officially begin on April 5th.  We will be utilizing sub accounts and was curious what other higher education institutions have done in terms of branding for their accounts and sub accounts.  Are they similar with some slight variances?  Are they completely different?  Thanks in advance!!

We do not have separate themes defined for our sub-accounts.  Everything has the same theme.  But, that's not to say you couldn't do something different at your school.  For example, if you had a general theme that you created at the root account level, then you might have a "Nursing Department" sub-account or a "Music Department" sub-account that has a slight variation on your main theme...such as maybe a specific logo for those school departments.  At both the root account level and the sub-account level, you could still use the same color scheme (for example, your school colors), and then decide if you want any slight variations on that main account theme at the sub-account level.

Thanks!  I know we can and know how to, I was wondering if anyone has done it and for examples. 🙂

Thank you for asking this. I'm curious too. I come from places with a very "don't stray from the brand" mentality. But Adobe recently got flack for recently making their logos so similar it's hard to tell them apart. We don't want people confusing classes or departments, so I'd like to see if others have examples to see a way they're balancing this.

We do prescribed learning so students will know where to go no matter which program they are in., but wanted to have something that let them know which of the three schools they were in. There are little variations, but pretty much the shells are the same. With this said, we did some changing for our new MSEd program but that was because their delivery (has both Asynchronous and Synchronous aspects in a majority of the weeks)

It's still a work in progress, we are determining pictures to use, so these are almost "dummy" pictures until we can put the ones we want in their place.  Didn't change much, but there is enough with the colors of the banners to distinguish.  Thankfully our University has three colleges and there are three approved university colors from Marketing so it worked out well! Below are two of the three. 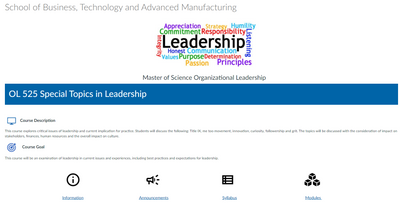 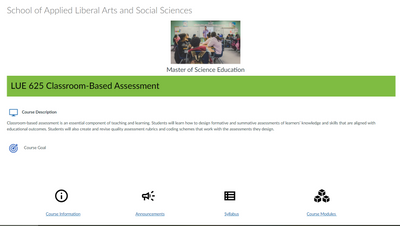