297 Kudos
Status: Open for Conversation Submitted by japhill on ‎01-21-2016 09:22 AM
(2)
Both creating and copy/pasting tables in Canvas (the rich text editor boxes) seems problematic and difficult.  The table structure is lost and only text copies into Canvas from MS Word and Excel when using the Firefox browser. When using chrome, one can see that the table copied into the rich text editor, however, when saved, the table properties, such as borders are not visible. When creating tables from scratch, the formatting options are difficult to understand and limited in scope. For instance, I cannot figure out how to insert shading into the top row of cells only.  When I tried to shade them, the entire table became shaded. While there are limited examples of formatting in the instructors' manual, they do not fully explain the process.  For instance, yes, you can insert "5" for borders, but what will that look like in my table - is that very thick or very thin? (Rhetorical question)  To format a table I just created, I went into the HTML code of a Blackboard table and copied it.  That is not the way I want to go about this.  Lastly, while I have some HTML knowledge, most of our instructors and students do not, so wouldn't have a clue where to begin with this.  I hope to see this feature become more intuitive and user friendly.

Any suggestions from power users out there for workarounds? I see that this has been a topic in the past, but evidently without changes to the software?  I'm curious if it's not a big deal for others?  I typically use tables quite a bit in my courses.

Every now and then I tinker with Excel and using it to generate HTML tables that I can copy/paste into Canvas. For a year or so, I've had a spreadsheet that uses a user defined function (UDF) that will take a range of cells as input and return HTML code that can be pasted into the HTML editor in Canvas. It adds all the CSS styling inline. It's been a growing process and I kept adding optional parameters as new needs came along.

I came here looking to see if there was a better way, but didn't find one, so I thought I'd see if anyone else was interested or could provide insight into it.

I took a couple of days this week and revisited work I had started and abandoned over the summer modified it to read the formatting directly from Excel using Visual Basic for Applications (VBA) rather than specifying it as part of a calling function. I currently have two versions. One version still generates the HTML and sticks it into a cell in the spreadsheet. From there, you can copy/paste it into Canvas. The second version adds an item to the context menu (right click) that will take the cells that are highlighted, convert it into an HTML table, and stick that into the clipboard.

I wrote it for my uses, which means that there is no column widths specified. I use cell padding on the left and right to get spaces between columns.  Here's some of the highlights. I don't use many of these features, so I don't know if I got them right.

Formatted as Table in Excel

Formatted as Table in Canvas

Tableau from Finite Math in Excel

Tableau from Finite Math in Canvas

I haven't tested this on a Mac yet, it's been a diversion from finals that need graded, but it's close enough that some people could benefit.

I thought I'd throw it out there and see if there was interest, or if there was something else that would allow me to take an Excel table and get it into Canvas so that it looks nice and is still accessible. I still think the ultimate solution is to develop styles at the account level and let people tag it using one of those styles, but this may help people who haven't done that.

YES! There is interest! I'd definitely use this tool and it's a bonus that it not only looks nice, but is **accessible!**

@kona  - You could have it anyway, but we're not instructional designers, so I don't know if my logic fits with the best practices. I do strongly dislike how Excel includes all kinds of formatting codes (same with Word), but I don't know if I've done it any better. In the past, I've tried using styles from the Canvas Style Guide, but they've announced they're deprecating that and we shouldn't rely on it. 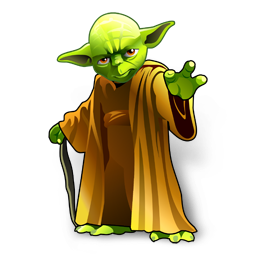 @richard_goans ‌ - Definitely see an interest in this tool, especially for our Math and Science teachers. 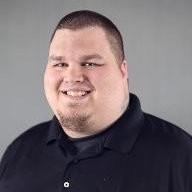 Checking it out now.

@wes_sisco You may want to see this.

@wes_sisco ‌ You may want to see this.

Reading through this thread, it's July 2019, the post started in 2016. 3 Years later and I feel we are all having the same exact issues, and it seems the best workaround is for me to somehow teach 900 teachers HTML coding so they can learn to successfully build multiple tables in Canvas. Is anyone else confused by this?

Teachers are here to teach - not fiddle with Canvas and the HTML so they can get the table exactly the way they need it.

@japhill ‌ - have you seen the new RCE?  This is on beta currently.

And then I dug even deeper and noted the row properties feature which has its own color capabilities.  Voila!

I just found this thread as I'm trying to cut and paste a table from MS Word to Canvas. This is helpful but I agree Canvas needs work if they haven't yet made it easier to use tables in Canvas! Hope they do so soon!

Copying tables from MS Word into Canvas may produce a lot of extra HTML code that just isn't needed for your page, and there are ways to clean up that code so that your page still looks the way you want.  A while back, I wrote a blog post about how to clean up your HTML code: HTML Cleanup‌.  I hope it may be of help to you.

How do I get ahold of your VBA code to generate HTML tables from Excel?

Just discovered that the new RCE allows you to fix this "pasted table has no borders" problem - it's a little complicated, so I made some screenshots. You have to select all the cells and use the cell properties dialog box to add the borders. 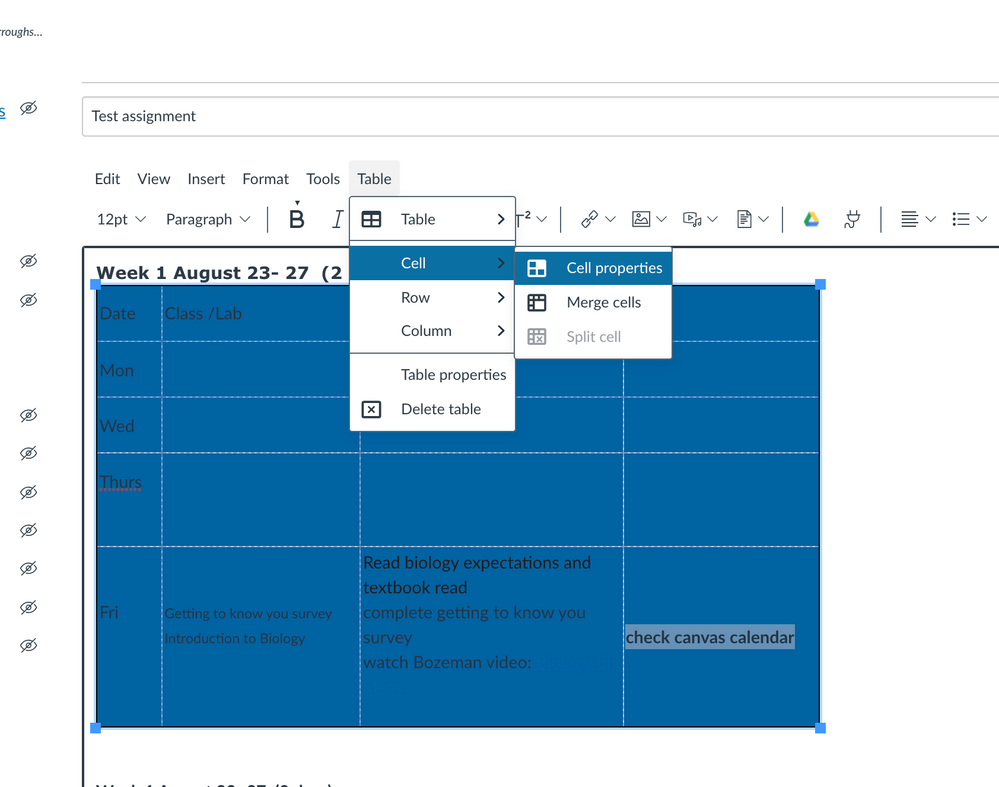 Go to the cell menu under table and select table properties

Under Advanced, change border color to black (or whatever color) 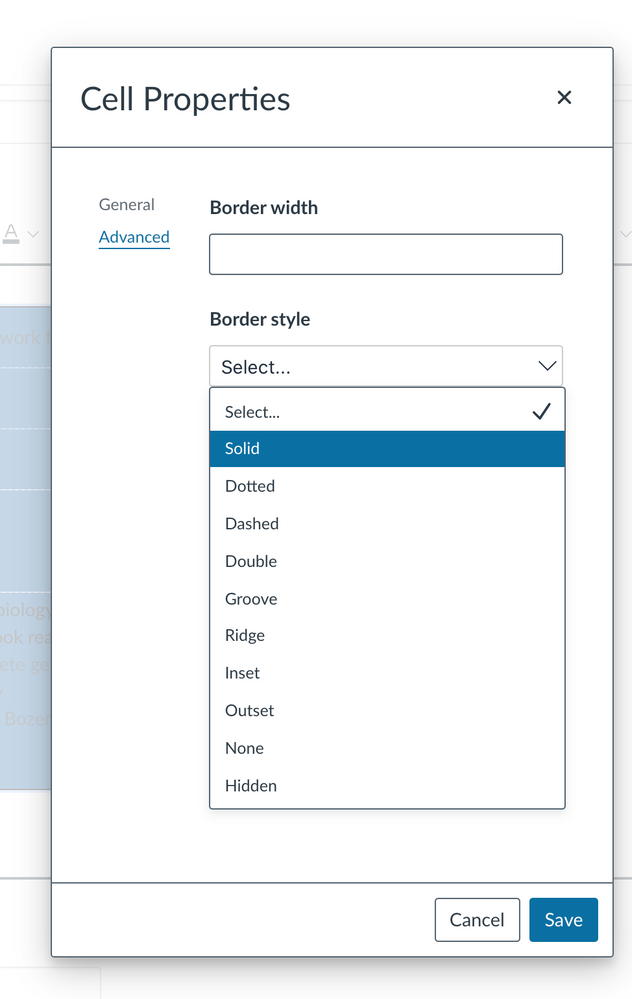 Change border style to solid (or whatever style you want) 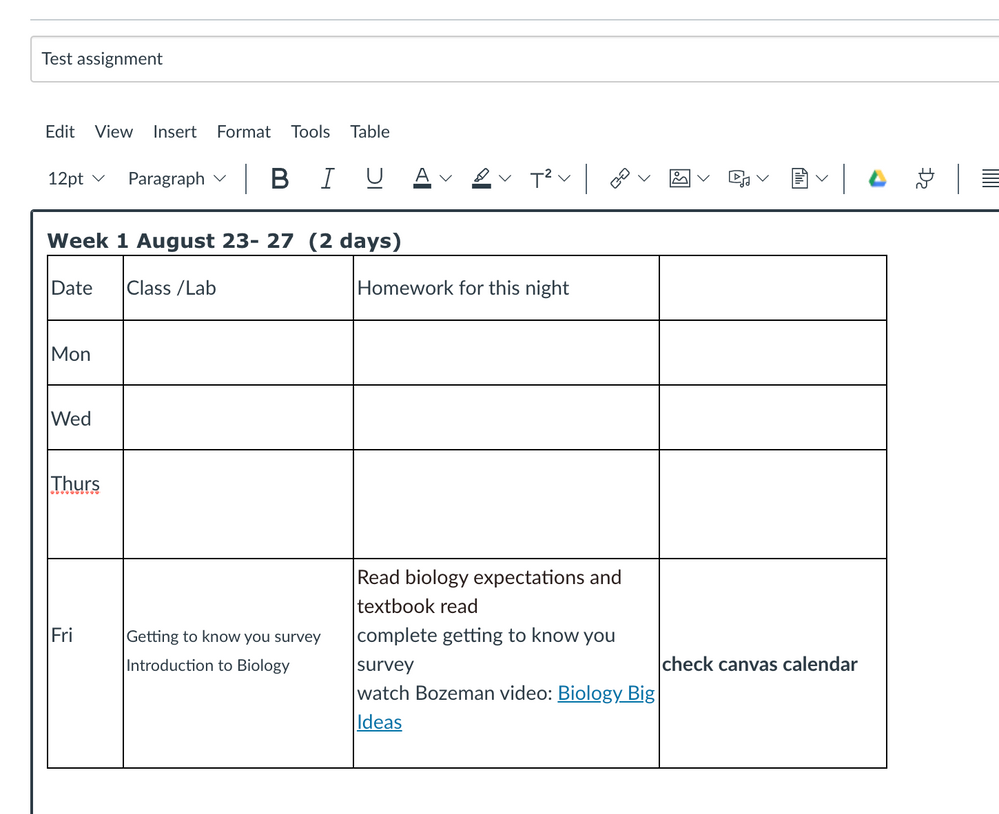