Recently, Instructure released a new feature to allow for a temporary suspension of users. Additionally, a new API was added to permanently remove user access tokens, requiring them to re-login to Canvas on any web browsers and re-authorize any third party apps (including the Canvas Mobile app).

These two features allow for the temporary suspension and reactivation of a user and/or allow Admins to force a user to login again across all devices and browsers. The features are only related in that they add new tools for Admins to manage users within accounts. The aim of this post is to help Admins understand the when and why for using each feature. 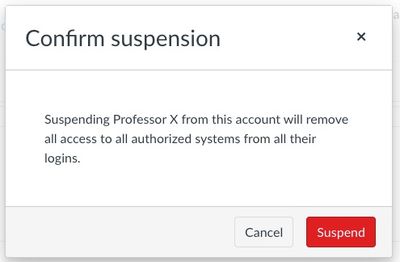 If you want to leave a user's enrollments intact but not allow them to log in, then user account suspension is the way to go rather than deactivating their account or ending their sessions.

Many accounts run their own Identity Provider (IdP) and have a need to force logout on the Canvas mobile app and other integrations (typically after a password change) without locking the user out of the account.

Why did Instructure build these features?

Many Admins have asked for suspension capabilities to allow them to lock accounts due to outstanding tuition balances or to allow time for investigation of a user. Additionally, imposing a temporary freeze for accounts may be desirable as a quick action to restrict access for an account that may have been compromised while further investigation is done.

The ability to end all sessions for a user is specifically meant to be used in conjunction with a forced password change. Changing a password does not terminate all access tokens for the user (and a deep integration with a non-Canvas IdP would be required for this to work), so any device that has previously been authorized to use the mobile app (or any other 3rd party app) will continue to have access via those access tokens. This gap can now be resolved by forcing termination of all access tokens via the new API.