So I got out of synch here when I saw the video had been made available, but they are still putting the finishing touches on that (just speaking for myself, I hope they will disable the popup that asks for personal info like phone number to watch the videos)... anyway, I will cycle back around to the breakout sessions when the video gallery is done.

Today, it is my pleasure to write about something that was not videotaped, but which was my favorite part of the entire time in Keystone: THE UNCONFERENCE. It happened on Friday morning, after the "official" end of the conference.

@kona  organizes this (thank you, Kona!!!!!!!!), and she wrote some earlier posts here at the Community that explain the goals and process:

What is an Unconference?

Why You Should Attend the UnConference

Here's a recap from  @mjennings  ; the UnConference is different for everybody, and he went to different sessions than I did (in fact, I don't remember even running into him there: there were a LOT of people, which was great to see!), so make sure you check that out also:

I showed up early because, like many others, I was toting my bag (heading to the airport after the UnConference was over), and I wasn't sure if there would be a convenient place to stash it. I shouldn't have worried: we basically took over a couple of floors of the Keystone Lodge, and as people arrived, a big heap of luggage accumulated, so that was not a problem at all. We had a delicious breakfast too; this was actually the only day of the conference I had breakfast because the other days it was kind of hectic trying to get from place to place.

A lot of people showed up (yay!), and we all received post-its from Kona (plus all the expert UnConferencers that were helping her) to list our ideas. Then, while Deactivated user gave a super-informative talk about UX (more about that in a separate post; I wish they had videotaped his presentation -- it was like a bonus session!), Kona and her helpers organized the ideas from the post-its into a series of concurrent sessions in the three different time slots. I snagged this picture from Matthew's blog post:

Imagine my bliss: each of the three time slots had a FEEDBACK topic (there must have been a bunch of feedback-related post-its), and they were all in the same room. And yes, it was the FOX FIRE room......... a sign! 🙂

So I shamelessly just stayed in that same room and got to talk about feedback with people for three hours.

The groups of people who showed up for each slot had their own dynamic (a few people stayed for two sessions; I think I was the only one who stayed for all three). People were there from totally different types of schools, and there were people with different roles (instructors, IDs, sysadmins)... so many questions and ideas!

One mantra emerged; I think it was at the end of the second session:
Everything is feedback, and feedback can be fun!

True confession: I got so into the conversations that I did a terrible job of taking notes (Matthew experienced the same thing!). I should have brought a voice recorder so that I could have recorded everything and then listened again later. Given that feedback is my theme for the school year (I have some feedback posts in my Community blog), it was really exciting for me to see how that is a topic of shared interest, with so many people thinking beyond grades and tests about the best ways to help and encourage their students, and also to gather feedback from the students about the work we are doing and how we can do a better job.

Just one example: I kept reconnecting with carroll-ccsd throughout the conference, including a walk we made around the lake (I can't even remember why that happened; where were we even going???), where he was telling me about the work he was doing on analytics and I expressed my hope that analytics could also include feedback from students about the content, rather than just clicks, time spend on page, page navigation patterns, etc. Anyway, we had had that previous conversation, and then he showed up at one of the Feedback sessions, which was so cool: I know that it really helps me to talk to people with awesome technical knowledge that I don't have, and I am also so eager to share my perspective as a teacher with sysadmins who might not have direct contact with students.

That interaction among people of different roles at different schools is one of the best things about the Community in my opinion, and the place where I experienced that the most at InstCon was at the UnConference. Of course, I know there was a great mix of people at every official session too, but in the hectic rush from session to session and the big size (usually) of the session audience every time, I didn't really get a sense of the mix. But at the UnConference, there was time for everybody to be themselves and get to know each other, sharing our ideas and experiences. It was fabulous.

I need to write up another post about the UX presentation and also some more Unconference details, but for now, just to say: thank you, Kona, for organizing this wonderful event, and to Instructure for making it part of the conference (venue, catering: it was all excellent!).

Here's a picture Kona took of those of us who just couldn't get enough. We finally said our goodbyes, but if it hadn't been for our airplane itineraries, who knows how long we would have just sat around talking! The gigantic heap of luggage dwindled on down and down and down until we were finally out the door:

Thank you for the kudos! The Unconference is always one of my favorite parts of InstCon and it's great to hear such positive feedback! Also, thank you so much for sharing your knowledge/expertise during the feedback sessions. I only got to sit in on part of one of them, but it was wonderful and you really shined as a room facilitator (which you just seemed to naturally take on the role of!). 🙂

Ha ha, you know that was so weird for me, though: I haven't been in a classroom in literally 15+ years.

But I got used to the world of face to face again (kind of...) in the days before the UnConference.

And it was also so nice to have an opportunity for real conversation, and of course I wanted to know who everybody was and what questions they brought with them that we needed to try to answer. So yeah, I did "around the room" we go. And it was such a cool mix of people every time! 🙂

I can't even remember why that happened; where were we even going???

I was trying to track down SHEBENE and  @lenzeb  who were at the Lodge making a video with Construct, I believe you were heading to a session. I saw you at the crosswalk and figured you'd be a good walking buddy, the rest just happened. Follow up to that conversation... the project was recently awarded funding for NVLA through the College and Career Readiness grant. The state agreed that understanding the student experience through data and feedback can help drive student achievement, by supporting tools to help us make it happen. I developed and deployed an analytics pilot in the spring to vet the feasibility of the solution stack and how we would use it. Time to focus.

I will be using this data to reduce the distance between the student a teacher, and more...

...you know that photo above, the conversation where orwinr‌ dropped Moore's Theory of Transactional distance on my head. Helping me frame some of my arguments and sound bites. Here's a photo of my office white board, these 3 objectives have been posted there for awhile.

This community and it's contributors make me happy. :smileygrin:

From talk to ACTION: I love it!!! And I know you will share what you learn here. That is an inspiration board I would find inspiring on my own wall. 🙂

Definitely planning to share, once we have something a little more concrete and some results. 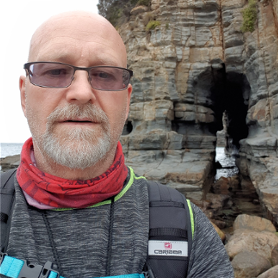 carroll-ccsd, it was a pleasure chatting with everybody at the unconference and was even more fun waiting around for our transport to arrive for the trip home. I am thrilled that you found the transactional distance thing helpful. I use it all the time when thinking about the engagement of the  participants in just about anything virtual. laurakgibbs, it was great to meet you in person and of course thanks to  @kona for making the unconference happen. It was well worth staying for 🙂

orwinr the tiny camp fire chats and the mini sessions in those little rooms really invites collaboration and shared experiences. I've talked with some of our team here about following up with you to learn about your success with student volunteers and feedback, hope you don't mind if we send some random questions your way. :smileygrin:

A big thanks to  @kona  and crew for the unconference, it was fantastic!

Community Coach
In response to orwinr

orwinr‌ this sounds like some wisdom that needs to be shared. Transactional distance?

It even has a Wikipedia article! I had never heard of it before either,  @Bobby2 ‌! Here is the article:

We had a really good discussion about that because it turns out that Randy's wife is an expert in Second Life: I always joke about living my whole professional life  (and it's true), but I don't have any experience with virtual worlds like that. 🙂